Tellings: A Pictoral History, Or, My God! Is That Dot Matrix?

Here is a pictoral history of Tellings -- as a game, as a piece of my writing, and as a living document. What better way to show how far the game and the book have come than through pictures? It has been eye-opening to put this together. It is kind of like opening a time capsule that was buried in the yard of your childhood home. The first images are from Tellings's ancestry, a game that started as Rule of Magic, then became just Rule, and then became Tellings. Here are a scattering of old character sheets, book pages, and rulebook covers. Enjoy!

Rule of Magic (circa 1990) was the high fantasy game that I wanted to write, a game that celebrated spells, mages, and magic. I wanted to get away from the stereotypical, traditional philosophy that magic was rare, unnatural, corrupting, or vestigial. It is the philosophy that deems mages physically "weak" and esoterically "strong," that severely limited magic users on the one hand and yet gave them free reign in the end game on the other. I understood that this was a game balance issue, a mytho-cultural set of expectations. So, I wanted to design a game that challenged these ideas (or at least complicated them). Here (below) is the character sheet for Rule of Magic. (Yes, it was done on a very old Tandy with a desktop publishing program a step up from PrintShop and printed on a dot matrix!) 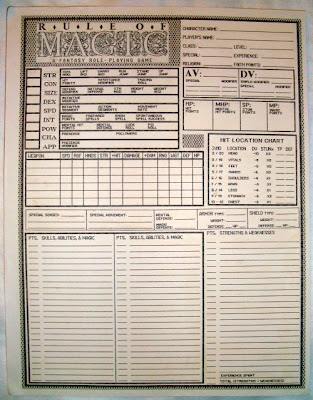 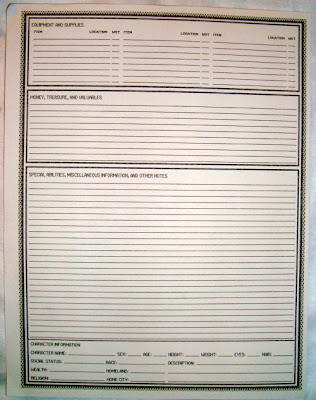 Rule of Magic became Rule (circa 1991). In a day and age of pen-and-paper gaming that became increasingly obsessed (even myopic) about game worlds and world-building, I wanted my game to be about game concepts and game building. I decided to focus on a game that would serve as a template system (and not a universal one) that provided players with a solid foundation of mechanics, character creation, and frames over which they could impose whatever world they desired. In other words, I wanted a great game first and a great world second. Rule of Magic and Rule have lineages to systems like Champions and AD&D (which were the games I played at the time).

Here (below) is a Rule character sheet and a few chapter title pages. (I think I graduated to my first laser printer by now, and my layout skills were getting better, too.) 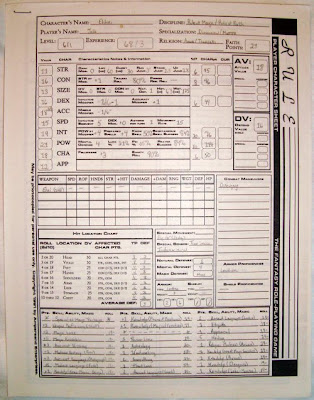 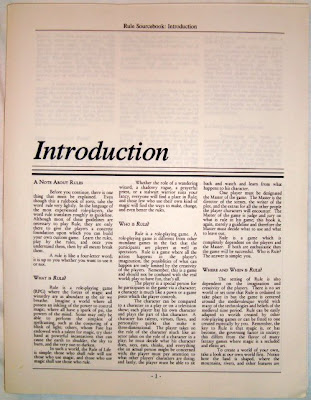 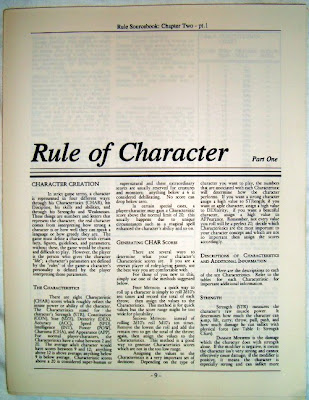 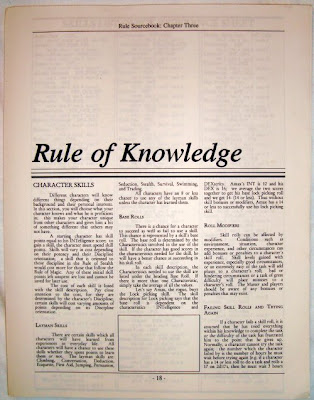 In 1992, Tellings was born. The game was slowly evolving. Character creation became more fully point-based, skill-based. Though, the early versions of Tellings outlined "disciplines," which were not classes per se. Rather, characters were Rule of Steel, Rule of Stealth, Rule of Faith, or Rule of Magic. These "Rules" set parameters for skill and ability costs. Though a Rule of Steel did not begin with magic, they could still learn it at an increased cost. (This system carried over to and remains in Archaea, my live-action role-playing game, which was taking shape right about this time, too.)

The first "reader's copy" of the Tellings rulebook (1992) was a simple Word document, single-sided, and spiral bound (see below). The evolution of the book would take leaps and bounds afterward. The very first copy of Tellings did not even have a spell list or a prayer list! 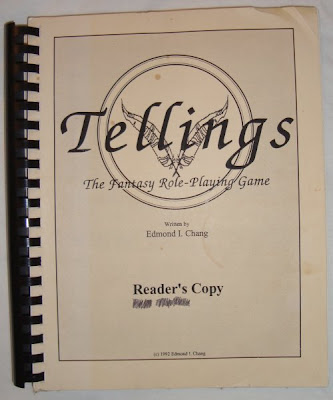 Around 1994, the look, mechanics, and philosophy of the game "graduated" so to speak and served as the foundations for all subsequent iterations of the game. I finally got hold of a robust desktop publishing program, PageMaker, and went to town with the book's layout and design. 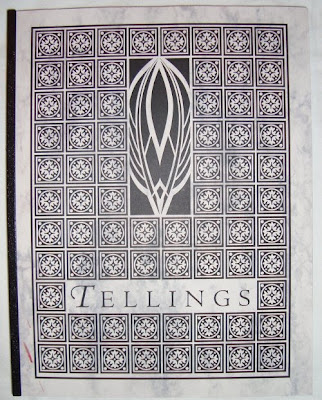 The 1996 version of Tellings (below) was grew to 312 pages! The rulebook developed a fuller game master section and (at the behest of players) more spells and more prayers. The twin quills of the previous edition was edited to a single (more tasteful and less suggestive) quill. The quill would become the logo of the game. 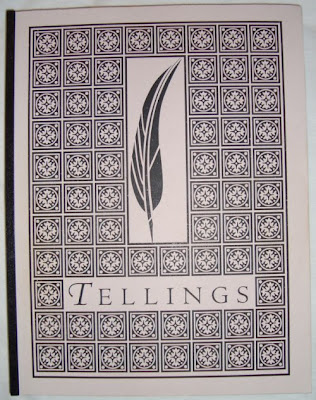 Two versions of Tellings would come out in 1997. Again, the books rarefied the Attribute system, the skill list, the Strength and Weaknesses list, and the core combat, magic, and prayer rules. Books #4 & #5 would be almost 350 pages long! The rulebook, by now, also boasted an extended index. I was always bothered by how skimpy and sometimes confusing gaming book indexes were. I wanted Tellings to be useful, functional, and as complete as possible. 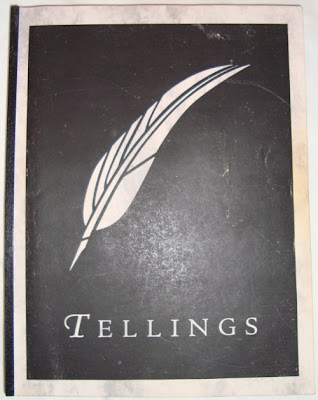 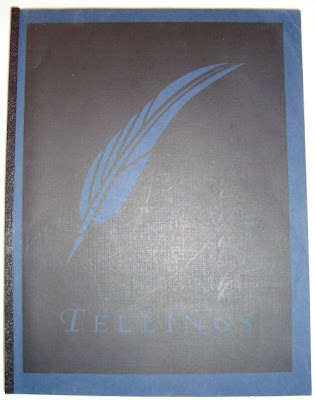 Shortly after a major move from Maryland to San Francisco, a sixth book (1999) and seventh book (2000) came out (below). Because self-copying the books were becoming prohibitively difficult (not to mention expensive), I decided to reduce the interior font by a small margin, to cut unnecessary pages, and to reduce the number of pages without reducing any important content. In fact, the game gained in material (once again in the spell and prayer department) but was a fit, trim, fighting weight of 318 pages. The seventh book got a lot of use! 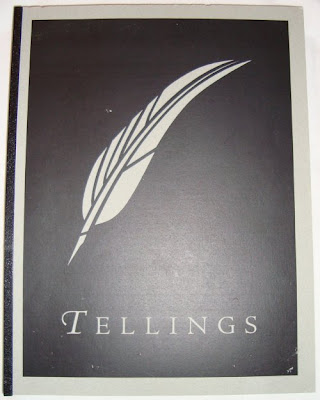 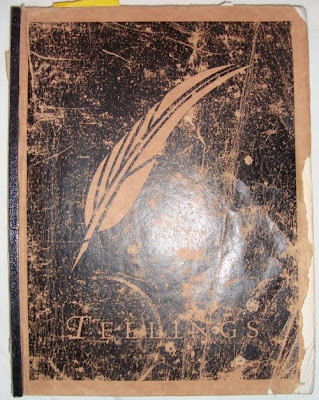 Book #8 (2005) was released after some time. (I had moved back to Maryland in the meanwhile.) It was a further refining of the rulebook. Somewhere along the way, it gained in content returning to a healthy 346 pages. Book #9, which is really an updated version of the last book, came out in 2007. It is the current rulebook that I use. 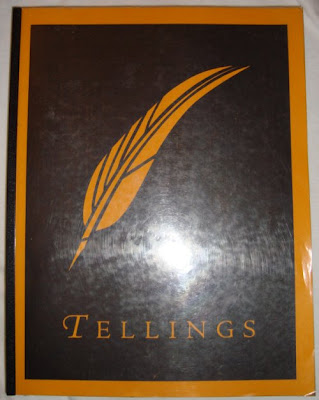 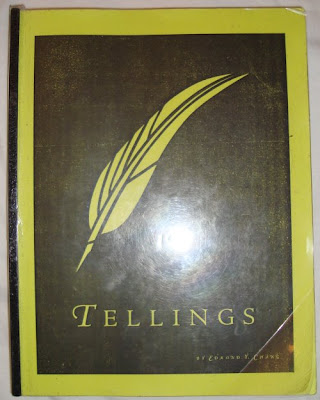 Next year's book, which will be a fortuitous Book #10, will hopefully be the last version for some time. (That's what I have been saying for the last twenty years.) I do feel that the game is "done," though, even though I want to keep editing, proofing, and perfecting. I suppose the spirit of making a great game, of great game making is what keeps Tellings going.
Posted by Wright of the Telling at 3:31 PM 1 comment:

Tellings is turning 20 in 2010! It's amazing! I am actually astounded that the game has been around that long, and it was that long ago that I wrote the first version of the rulebook. It has been an amazing and rewarding twenty years. I have made many friends through the game, I have becoming a stronger and more confident writer, and I think I have grown as a gamer, a game master, and a game designer.

Given the milestone (a major one at that), I hope to have the 20th Anniversary Edition of Tellings out sometime next summer. It'll be the Platinum Edition!
Posted by Wright of the Telling at 1:49 PM 1 comment:

Welcome to the Tellings Role-Playing and Storytelling Game blog! The hope is that the blog will serve as a supplement and comment space for the main Tellings website: http://www.tellings.com. Both the site and the blog have been dormant for some time -- on hiatus as it were -- but plans are now in motion to get things moving. Finally. The wheels are turning. The fates are spinning. And machinations (of a good sort) are underway. The coming calendar year will be a good one for the Tellings "franchise." I hope.

Last year, I ran a 2-credit focus group class on table-top role-playing games featuring Tellings as the system of choice. The class was called "Tabletop Gaming as Storytelling, Storyplaying." Because of the class, I had to update sections of the Tellings website. And more updates are underway, including adding to the sections on magic and prayers and combat. (I am holding off for the time being till both the new edition of the rulebook and a new revision of the website can be launched simultaneously.) Also because of the class, my affection for and desire to play Tellings regularly again was sparked. I decided that I needed to make some time for the game and for working on the system.

Another impetus for working on the game is a material one. My old desktop computer, a PC from four or so years ago, was on its last proverbial leg. So, I backed up everything and migrated to a slightly newer box (donated by my partner), which runs great so far. However, I realized in the transition that much of the layout, graphic design, and publish work that I have done for Tellings (and for my live-action system Archaea) is in danger. Some of the art work (and the Tellings map) are no longer supported (since I did them with the Windows Draw program) and are basically in an irrecoverable file format. (I am going to experiment with getting CorelDRAW and see if it will import the files.) Moreover, all of the layout has been done in PageMaker, which is still being used but is no longer actively supported by Adobe. I would like to upgrade my computer system (most likely moving to a Mac since my laptop is now a Macbook) and get the full Adobe suite of publishing software. That way I can transfer my files to InDesign.

Since I have to work on the book anyway, I might as well revise it, tinker with it, and make sure everything is to my liking. Though the game is "fine" and "works" and is in really good shape, I do think there are some gravelly spots that could use further smoothing. The core mechanics are not going to change -- those are spot on. But, I'd like to revise some skills, Strengths, Weaknesses, spells, and prayer mechanics. I am also still thinking about how to make combat less daunting to the "newbie" player, how to better the game master section, and how to work through power levels.

I will be using the blog to brainstorm and work through ideas. I will also be using the blog for my current gaming table's adventure. And I welcome input, feedback, ideas, platitudes, and material from loyal Tellings players and followers.